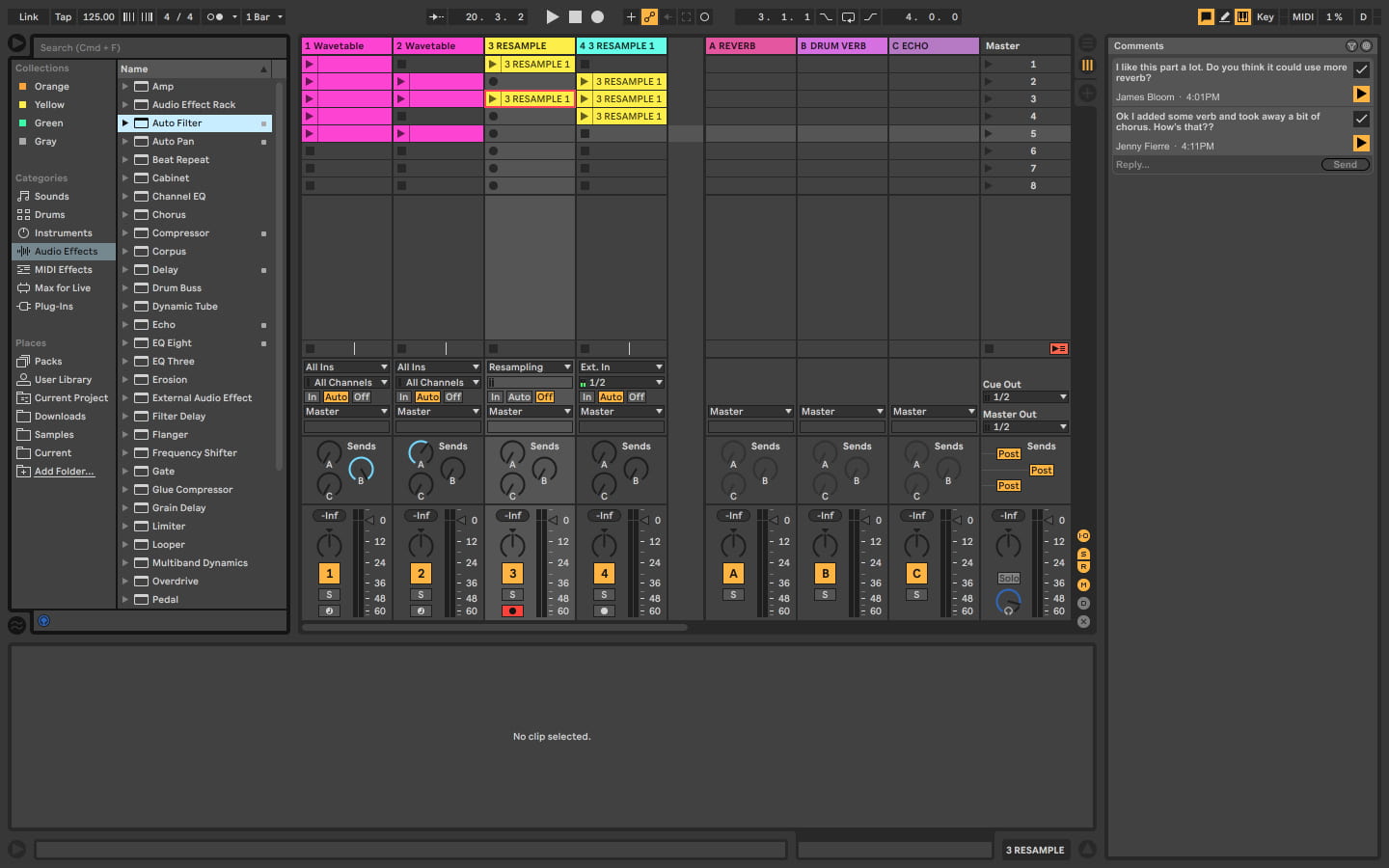 Ableton Live is one of the most popular Digital Audio Workstations (DAW) used for music production. It’s loved for its quick ideation features and ability to play live shows. The feature it is missing is multi-user collaboration.

So how do you turn multiplayer on, in music production software?

I began by creating a survey to find out how people collaborate with music software. Everyone has their own solution, which varies by project, but the most common type of collaboration was a mix of in-person and distanced work. Users need something that flows nicely between their different contexts.

I used the survey to narrow the scope of questions I would ask in my interviews. Many of the interviewees were students and it was exam season, so I had to keep interviews short.

Next, I hosted semi-structured interviews with musicians around the topic of collaboration. These were fairly loose with just a few questions, this was to accommodate for the very different setup each musician has (some rely only on software, some record physical instruments). For these interviews, I focused on what problems people ran into during collaborative projects. Users had the most issues with sending files back and forth. This is because each musician has a different set of plugins and folder structures. If someone doesn’t bundle everything in the folder when they send it, the file is broken.

Issues musicians have with collaborative projects

The next step was to look into how collaborative tools solve file management and multi-user support. I researched Figma, Miro, and Google Docs to see how they handled multiple users. This highlighted key features and patterns that I would include in my design. By keeping to convention, I was looking to reduce the learning curve.

I began my design phase with a generative brainstorm session, keeping in mind the core insights from my research.

I narrowed things down to 4 features: cloud files, comments, live cursors, and ‘spaces’. We’ll look at the first two in this case study.

The most significant change was switching from local to cloud files. This allows for a more natural working environment where users can focus on the creative process instead of file management.

Cloud files would include all audio files, midi files, devices, and plugins. Instead of sharing files, the user would share permissions or links to files. There’s no more messing around with folders and making sure you saved everything to the right place.

Since files would no longer be hosted on the user’s computer, they would need a way to manage their files. I created a small file browser to solve for this. 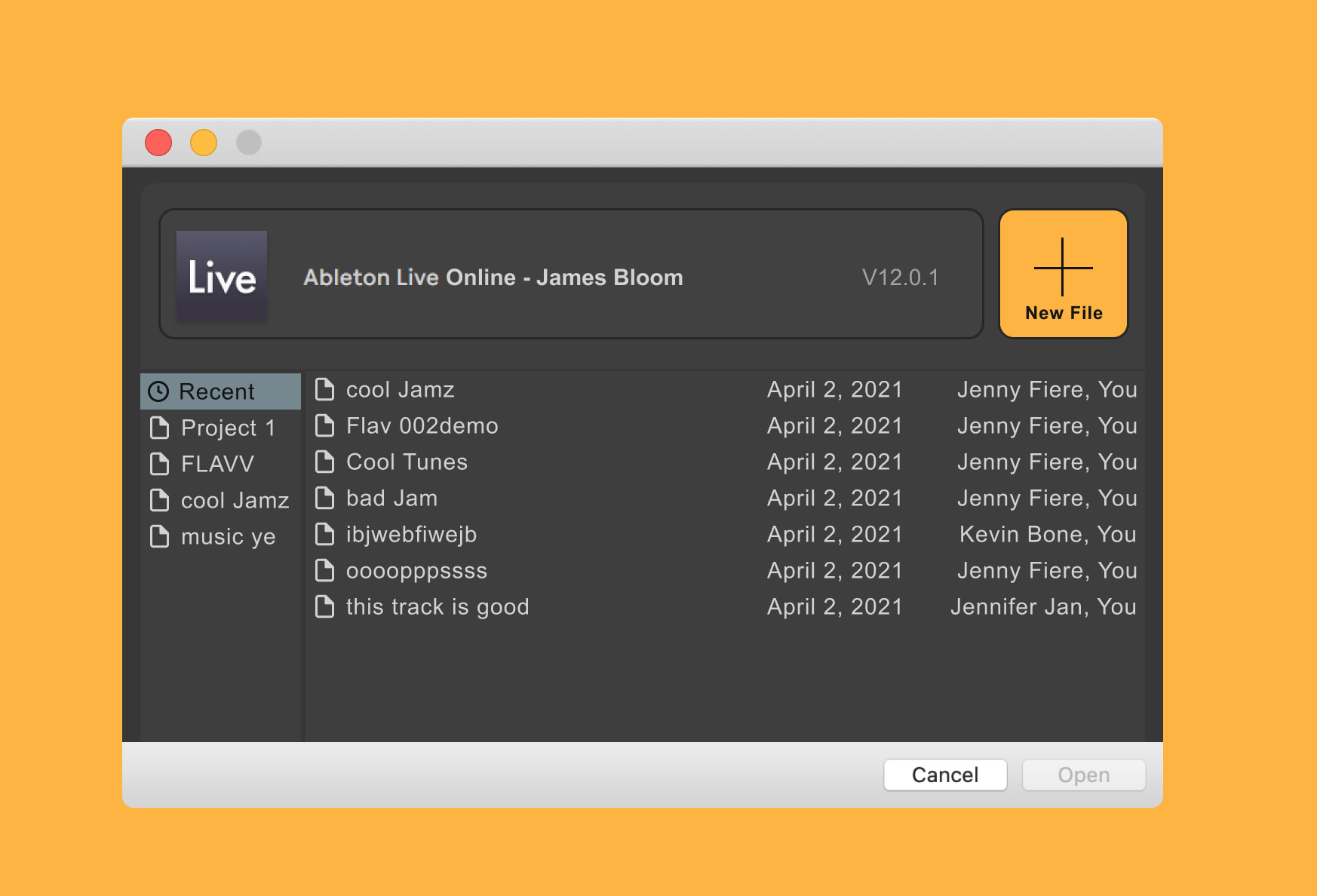 Because files were now cloud enabled, it opened the door for multi-user support. This is where comments come in.

Users would need a way to communicate about their project. I considered if they could communicate outside of Ableton Live, but describing music with words is difficult. It felt necessary to include some kind of communication.

My idea started with a chat pane, but evolved into comments. The goal was to maintain Ableton Live’s focus on music production and performance, rather than on tangental features like chat. 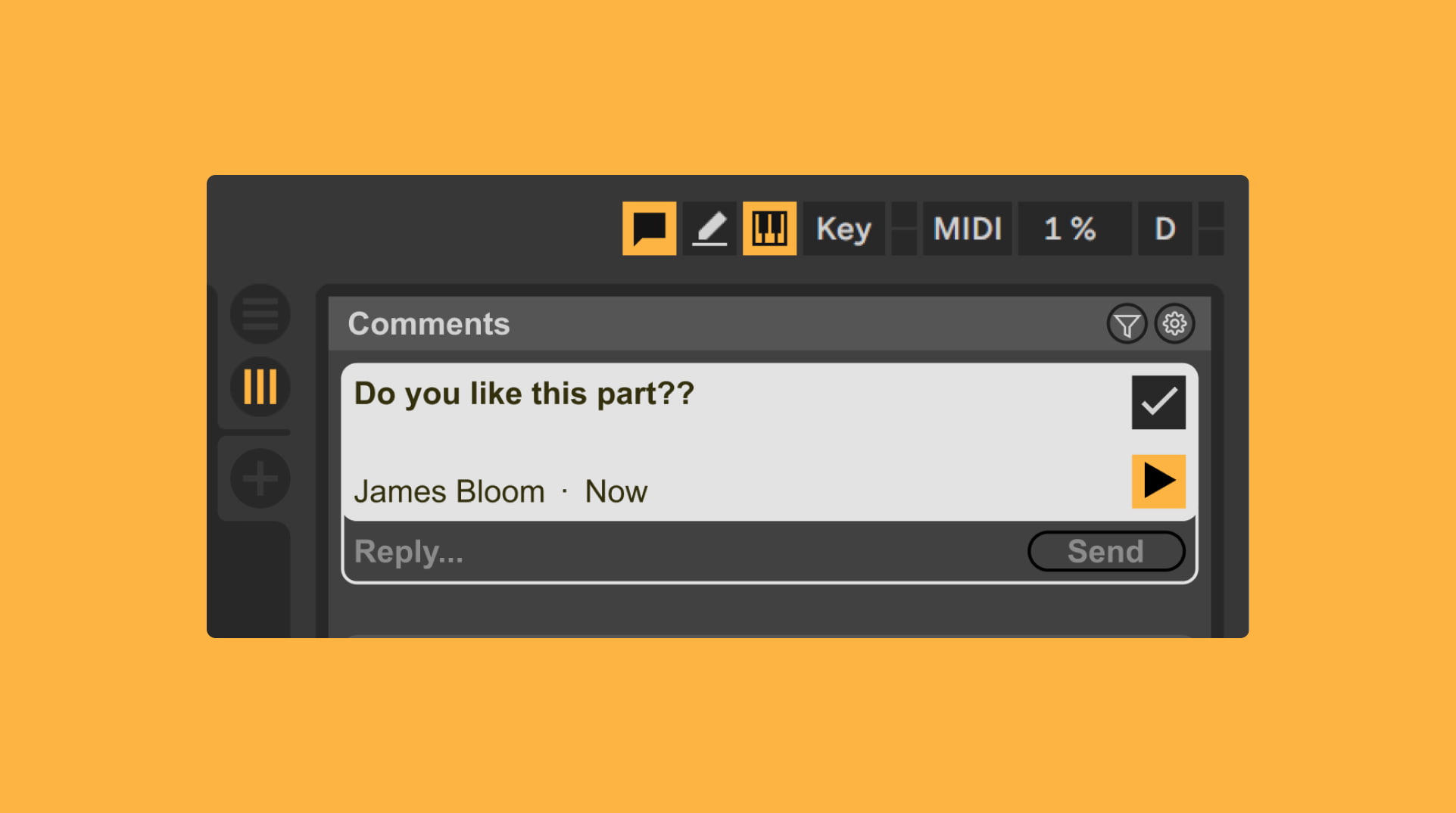 Comments would let users reference a particular clip or scene. This allows collaborators to talk about the music by quoting a particular part. Using this combined with words felt like the lightest-weight way to add conversation to Ableton Live.

Clips are usually short riffs or sections of a song, like a chorus or verse. They are hold one single instrument’s sound.

Scenes are groups of clips, this would typically be all the instruments for a section like a chorus. 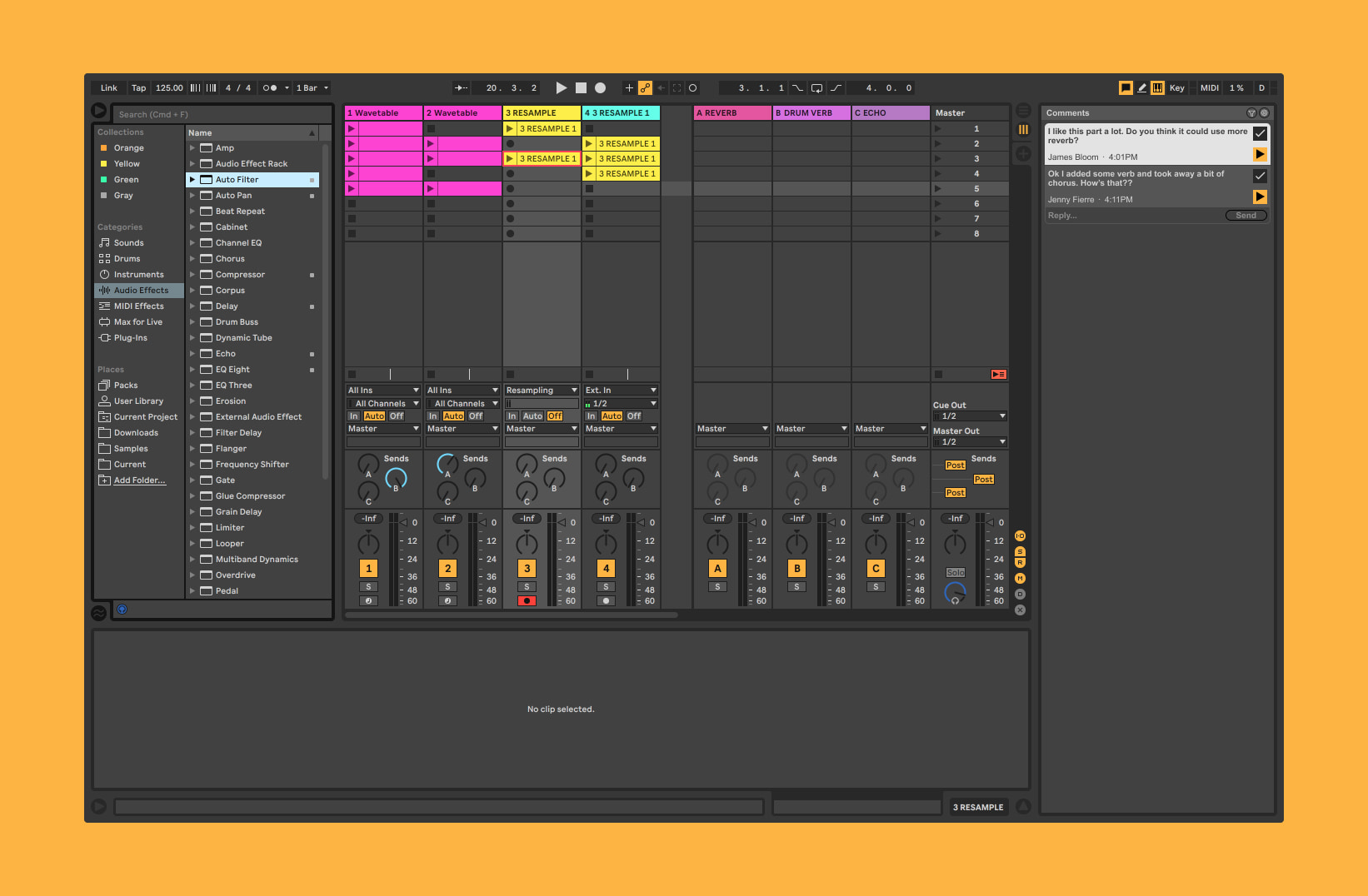 The quotes added an opportunity to let users suggest changes without committing to them immediately. By integrating the comments with Ableton Live’s ‘clips’ feature, users can hit the play button to hear an idea. Collaborators can approve changes by hitting the check button, which commits that version and hides the comment. 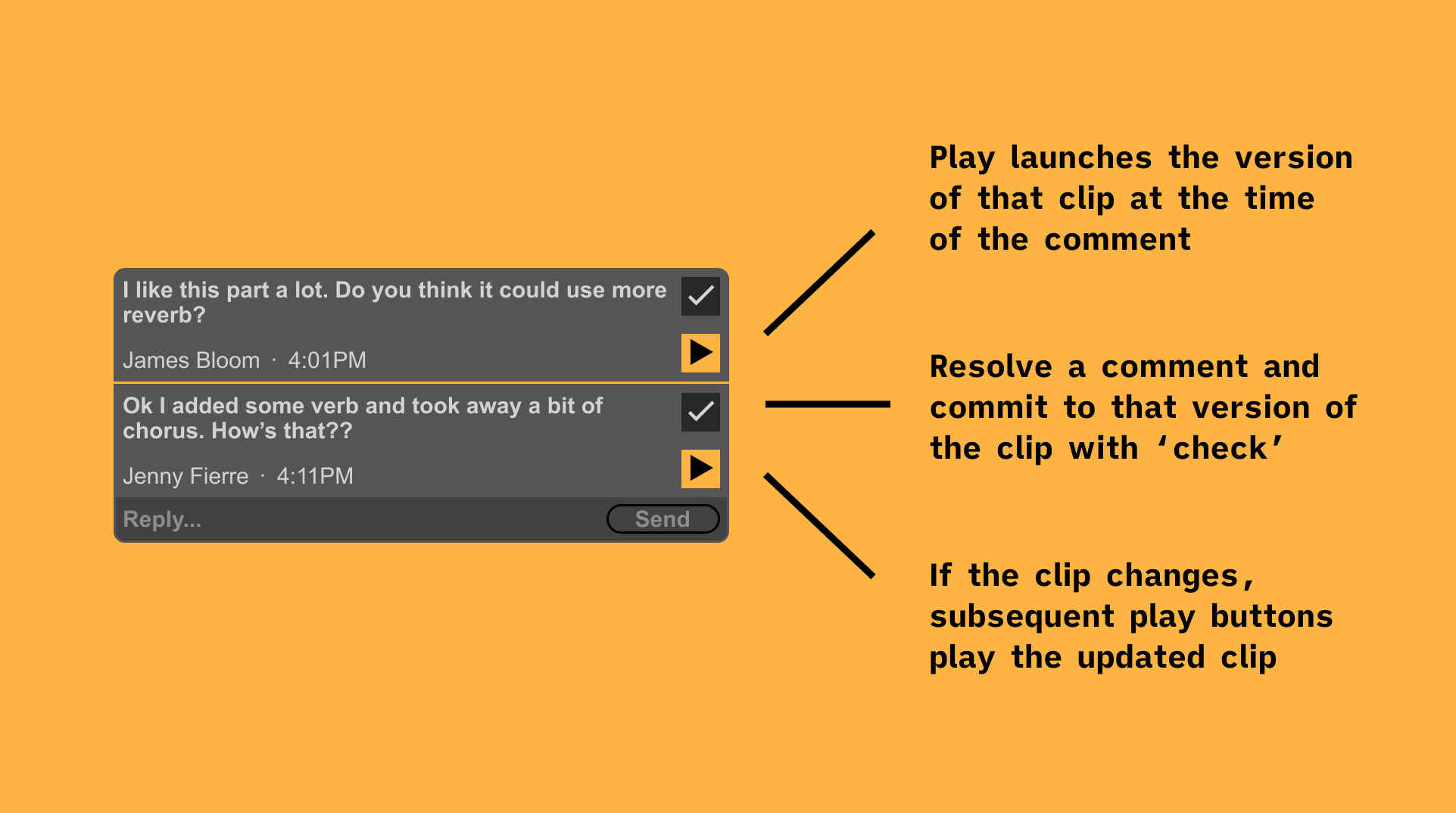 I used a high-fidelity prototype to test how users would feel with the collaborative features. Users needed context for the features to make sense, so that’s why I went with high-fidelity.

I learned users liked the new feature set. They felt it added just enough space to allow for collaboration without taking the focus away from music-making. To further support the unobtrusiveness, the new features can be hidden with one click.

Users did have a few issues with my first design, which emerged through testing.

Starting with the launch menu, it felt like a radical change to add one into Ableton Live. I deliberately didn’t put much in the menu because it is a large product decision. However, users felt it was incomplete. A better solution would be to simply have Ableton Live manage local files for you, pulling data from the cloud as others work on the project.

A cloud status-indicator in the top bar with a button to go offline would work well to satisfy the main concerns of the users.

As with most of Ableton Live, a manual and tutorial may be necessary for the comment feature. It would definitely need to be beta tested at length to figure out if there are better ways of surfacing the feature. I think a better introduction would be to remove the version/commit feature and just have comments. As users learned the feature, versioning and commits could be added back in.

The overall feedback was positive, however, the design needs more rounds of testing to complete this feature set.

Here is a walkthrough of all the new features:

The behaviour of clips wasn’t immediately clear to users. I could’ve used the help feature currently implemented in Ableton Live to allow users to discover features on their own.

Adding cloud files seemed like a simple change (from the user’s perspective), but it added a lot of complexity by adding the issue of offline modes, multiple users, and a launch menu. This added unexpected complexity to the design process.

Thanks for reading. If you'd like more detail, or just to chat, shoot me an email at gnlconnell@gmail.com.

A design exercise exploring ways of improving way-finding for PMs and engineers within Figma. 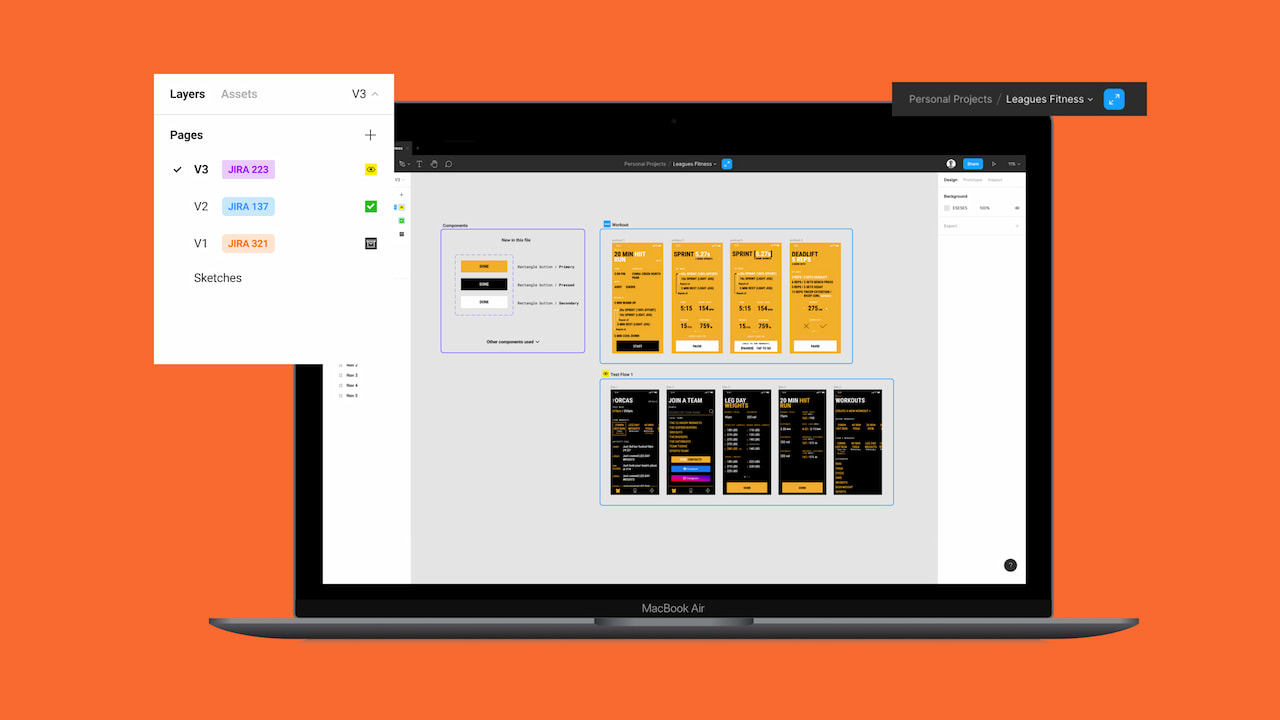 Redesigning the IterateUX website to help connect young and experienced UX professions through their community. 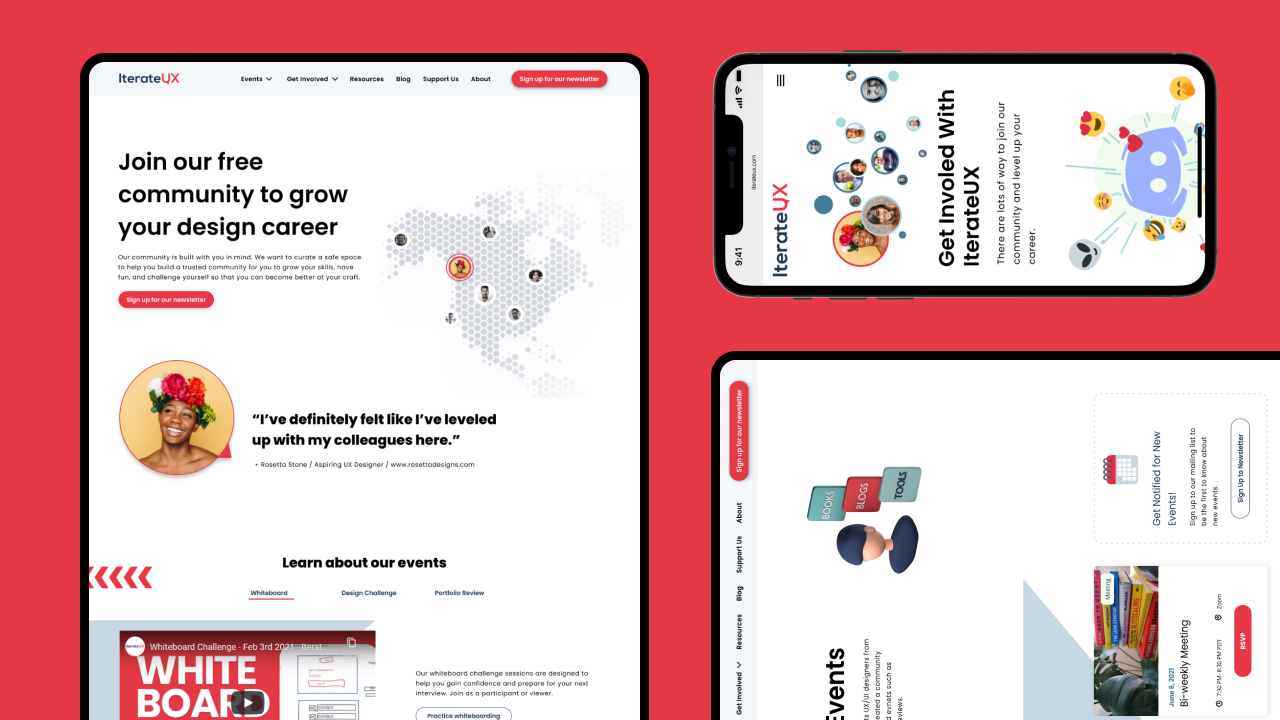